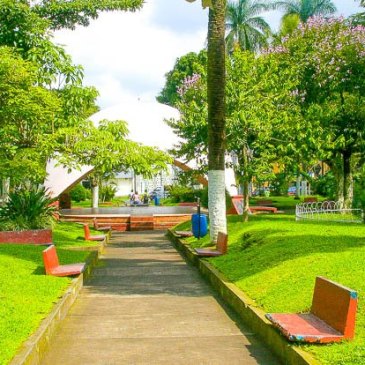 Grecia (meaning “Greece”) is the capital city of the canton of Grecia in the province of Alajuela in Costa Rica. It is also the name of the distrito (Spanish, meaning “district”) that includes the city. The district of Grecia covers an area of 6.86 km², and has a population of 15,457.

Located in the Central Valley’s rolling hills and sugar cane plantations, Grecia is a picturesque town with a mild climate and a wonderful, active Chapter!  Reknowned as the cleanest town in Latin America, Grecia boasts an immaculate and beautifully landscaped central park that is dotted with huge shade trees.

There are several urban legends about this church. One recounts how the church was donated by some foreign country, and sent to Greece as a gift, but was wrongly shipped to Grecia, Costa Rica. Another legend states that the final destination of the church was the city of Punta Arenas in Chile but was disembarked, by mistake, in the port of Puntarenas, Costa Rica and later sent to the city of Grecia where it was assembled.

However, records clearly show that the instruction, shipment, and construction of the church were a coordinated effort of Grecia’s population, the Catholic Church, the Costa Rican government, and Alejo E. Jiménez Bonnefil (1858-1922), a Costa Rican coffee producer and exporter who was in charge of commanding and importing the church from the manufacturer Ateliers de la Société de Couvillet in Belgium, in the late 19th Century.