One favorite area just to the NE of Guapiles, is the Tortuguero National Park.  Guapiles chapter members often schedule a 3-day/2-night trip here.  It is accessible only by boat or plane, so they usually arrange a nice bus to the launch site, and take a covered boat to the chosen resort.

The National Park protects 19,000 hectares with elevations from 0 to 390 meters (0 to 1280 feet) at the top of Cerro Tortuguero. The habitats represented here are beach, estuary, marine, freshwater riverine, and tropical lowland rainforest.

Tortuguero was protected as a nesting sanctuary in 1963 and declared a National Park in 1970 largely due to the efforts of the Caribbean Conservation Corporation and a turtle biologist named Archie Carr.

Nearly 20 feet (6,000 mm) of rain falls on Tortuguero yearly. Expect rain at any time of the year, but the three wettest months are December, June, and July, and the three driest are February, March and September. Yearly average temperature of 79 °F (26 °C).  Luckily, Oregonians travel here in February!

The extensive network of freshwater creeks and lagoons behind the beaches of Tortuguero are home to seven species of river turtles, Spectacled Caiman, Southern River Otters, a number of crustaceans, and over 50 species of freshwater fish.

As you take a trip on the daily tour boat (early morning is recommended), or paddle a canoe through the freshwater canals you are also likely to see Spider, Howler and Capuchin Monkeys and dozens of species of birds.  If you are lucky you might spot an endangered West Indian Manatee.  While sitting in your launch, hold your cameras tightly!  Some of these monkey’s might just swoop down and try to take it! 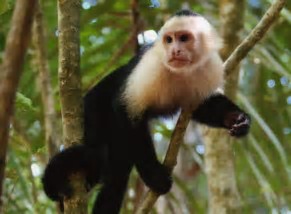