Nicoya, a city on the Nicoya Peninsula of the Guanacaste province, Costa Rica, is one of the country’s most important tourist zones; it serves as a transportation hub to Guanacaste’s beaches and national parks. According to the 2000 census, the city’s population was 13,334; second in the province only to Liberia. The city is the district seat of a cantón of the same name, which in 2013 had 24,946 residents. 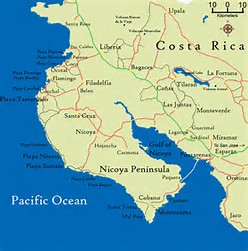 When conquistador Gil Gonzalez Dávila entered Nicoya in 1523, it was the largest chiefdom on the Pacific coast of Costa Rica. Nicoya took its name from the Nahuatl appellation Necoc Īāuh, literally “on both sides its water(s)”, as Nicoya is in fact situated between two major rivers. The Peninsula de Nicoya is itself named for the city, Nicoya being the most important town in that area.

The treasurer on Dávila’s expedition, Andrés de Cereceda, reported a population of 6,063 inhabitants under Nicoya’s leadership, almost five and a half times larger than the next largest settlement visited by the Spanish along the Pacific coast in the early 1520s. According to 16th-century chronicler Gonzalo Fernández de Oviedo y Valdés who visited Nicoya in 1529, the layout of the indigenous community was similar to that of the larger settlements in nearby Nicaragua and included a central plaza with temples, a low pyramidal mound used for human sacrifice, and specialized plazas for markets and chiefs’ residences.

Many of the earliest colonial documents about pre-Columbian Nicoya appear to have been lost in a fire that burned the town’s archives in 1783.  In the resulting documentary vacuum, a number of interpretations regarding pre-Hispanic Nicoya have emerged. Foremost among them is the belief that as the southernmost representatives of Mesoamerican culture, Nicoyans lived in nucleated villages, and that Cereceda’s accounting of 6,063 souls merely represented the number of inhabitants of one village under chief Nicoya’s control.  The modern city of Nicoya is generally believed to be on the site of that village.

The center of Nicoya is spatially organized in the traditional Spanish-American pattern, with a central plaza surrounded by streets ordered in a grid pattern aligned with the cardinal directions. Atypically, the church is in the northeastern corner of the central plaza, not facing the plaza from a surrounding street, as was the Iberian norm. Today the church is locally referred to as the templo colonial; local oral history maintains that the church dates from some time between 1522 and 1544, when the parish of Nicoya was founded.  Locals are very proud to point out their church which is NOT facing the plaza!  Read more about it here on Wikipedia

Nicoya Partners welcomed us to a huge luncheon where we met our host families.  I happened to stay with the chapter leader, in her lovely home.  As I was unpacking for the week in my room, I heard what I thought was a freight train, barreling down upon us in the back yard!  I went outdoors to look, but saw nothing but a lush landscape of beautiful trees and a creek running behind her house.  THEN I saw it.  My first Howler monkey!  And yes, it chose that moment to ‘sing’ me another song!  I was so impressed.  I ran inside to get my laptop, got online, and then took the computer outside so I could share with my friend back in Portland, in real time, via Skype!  It was apparently hard for him to SEE the monkey via computer through the tree branches, but when the monkey ‘sang’ again, he sure heard THAT loud noise!  Imagine: howler monkeys are like tree squirrels there!